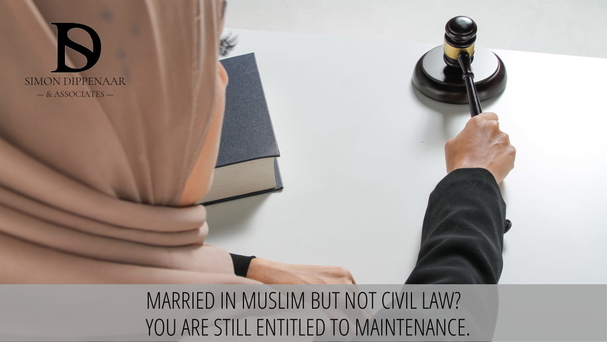 Muslim marriages are still not recognised in South African law. What does this mean for interim maintenance in a divorce?

Some time ago we wrote about Muslim marriages. Muslim and Hindu marriages, unlike customary marriages, are not governed by civil law in South Africa, although they are recognised as having the same rights, responsibilities and legal consequences. In order to enjoy the full rights accorded by South African matrimonial law, a Muslim couple must also register a civil marriage.

This anomaly was challenged by the Women’s Legal Centre, and the State was found to have failed in its constitutional duty to protect the rights of women in Muslim marriages. The court ruled that legislation must be introduced, within 24 months, recognising Muslim marriages and giving Muslim women and their children legal protection in the event of divorce. Failing this, these marriages could ‘be dissolved in accordance with the Divorce Act 70 of 1979’.

We are less than two years down the line, so the new legislation is not yet in force. But life goes on and, sadly, there will be Muslim couples in the throes of divorce without the full protection called for by the court. What rights does a spouse have in terms of interim maintenance while the divorce proceedings are underway – known as Rule 43 maintenance?

The good news is…the spouse (usually the wife) has the same rights as any other divorcing spouse in a civil marriage. According to Elsje Bonthuys, of the University of the Witwatersrand, the Recognition of Customary Marriages Act created the right to post-divorce spousal maintenance that was not present in customary law. This put the rights to spousal support of customary wives on equal footing with wives in civil marriages. However, it left the question of the rights of women in polygamous marriages unanswered.

This duty of support was extended to Muslim marriages not sanctioned by civil marriage. Currently, one or other of a Muslim couple in a monogamous marriage can apply for spousal maintenance in the event of divorce, and this includes interim (Rule 43) maintenance. In the case of Hoosein v Dangor in 2010, the court found that wherever the word “spouse” appears in Rule 43 of the Uniform Rules, this includes a spouse in a Muslim marriage. Therefore, a Muslim spouse is entitled to apply for an order for maintenance during litigation – in other words, interim maintenance – and the other spouse may also be ordered by the court to contribute towards the applicant’s costs in the divorce action.

However, as with customary marriages, it is still unclear exactly how wives in polygamous marriages will be treated in terms of interim maintenance.

If a marriage is deemed to be invalid

If a spouse in a Muslim marriage applies for a Rule 43 order, the Respondent spouse enjoys legal protection even if the marriage is deemed invalid in the main divorce action. The process is as follows:

If the Muslim marriage is found to be invalid, any divorce summons would also be technically invalid. The respondent to the Rule 43 might be understandably concerned that the order would apply indefinitely because they can’t divorce.  This could mean a significant financial burden. However, the court also found that, if the Muslim marriage was not valid as a civil marriage, a spouse could still issue a divorce summons and be entitled to a divorce trial.

SD Law is a firm of experienced divorce attorneys based in Cape Town, with offices in Johannesburg and Durban. What does a family lawyer do? If you need advice about legislation on Muslim or Hindu religious marriages or divorce, and if you are in need of a Rule 43 order for interim maintenance, our divorce lawyers can help. Call family lawyer Simon on 086 099 5146 or email sdippenaar@sdlaw.co.za and we will look at your case in detail and advise you on the best way forward.