This Marriage Week, we look at how a postnuptial contract can strengthen marriage

We recently wrote about the vexed issue of divorce and pensions. After the marital home, the pension is often the biggest asset to divide and the one that can cause the most contention, usually because it is the direct result of one spouse’s career efforts and not a joint acquisition like a home. Without an antenuptial contract in place, all assets are up for grabs in the game of divorce roulette. If you married in community of property and do not have a “pre-nup” in place, a postnuptial contract may be worth considering. 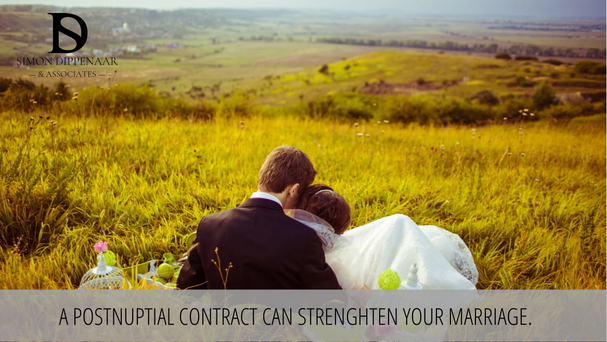 A pension is the asset that can most easily be divided unequally, i.e. one or other spouse can demand a 60/40 or 70/30 split. Of course this can also apply to the proceeds from the sale of a property, but it is more common for one partner to remain in the home and an agreement to be reached about the other’s compensation. A pension is simply a fund, which can be divided in any proportionality. Couples who marry young and have little in the way of assets in their own names often consider an antenuptial agreement unnecessary, or feel that it will detract from the romance of their forthcoming union. They default to a marriage in community of property. The notion of a “contract” can make a love match sound like a business deal (which of course in years gone by it was!).

Older and wiser? Or just older and richer?

As the couple matures, their careers advance, their pension funds grow, and they accrue other assets, perhaps including businesses, valuable jewellery or second properties. Then they start to think about protecting those assets in the event of divorce. It may sound contradictory, but when uncertainty is removed around one aspect of a relationship, rapport is strengthened in other areas as well. While it may sound like preparing for war, in fact developing a postnuptial agreement can lay the foundation for a more peaceful and loving connection.

When a marriage goes through a difficult patch, it is inevitable that one or other party loses sleep worrying about what will happen to this or that asset in the event of the differences becoming irreconcilable. Sometimes, this anxiety exacerbates the relationship difficulties because resentment is projected forward: in anticipation of marital breakdown, one spouse begins to fear the other will behave in a certain way, whether or not they have ever given any reason to believe they will. This fear then crystallises into a concrete expectation and whatever chance the marriage might have had is more or less eliminated, because one spouse has found the other guilty without benefit of judge or jury.

A mature couple anticipates these challenges by securing their assets via a postnuptial contract. As adults with an equal stake in the marriage, they recognise that it is worth being realistic and not starry-eyed about the divorce statistics in South Africa (nearly half of all marriages end in divorce). They know that it is better to discuss tough issues while they are still committed to the marriage. They can negotiate matters as partners. If the relationship deteriorates and they end up as adversaries, their hard-earned assets will become weapons and/or prizes to be won. A rational agreement reached when love and care for each other are the prime motivators will mitigate hostilities down the line if the marriage fails. More importantly, a post-nup may be a factor in making the union stronger. With anxiety over their future security alleviated, the couple can deal with any emotional disagreements and work to make their marriage better.

How does a post-nup work?

The marital regime must be changed to out of community of property and agreed by both parties (obviously!). A divorce lawyer draws up a new contract (called a postnuptial contract), which must be approved by the High Court. Approval is generally granted as long as certain conditions are satisfied. There must be sound reasons for the change of regime, clearly stated. All creditors of both spouses must be notified (and named in the application); and, most importantly, the court will want to be satisfied that no child is prejudiced by the change of regime. As with any legal contract, there is a process to follow. It is fairly straightforward, but diligence is vital. Good divorce lawyers with expertise in antenuptial and postnuptial contracts will ensure adherence to procedure.

South Africa joins 20 countries around the world in celebrating Marriage Week 1-7 September 2019. There are many tips offered by relationship counsellors on how to make a marriage work. At Cape Town Divorce Lawyers we don’t claim to be marriage guidance experts. However, we are always pleased when clients don’t need our services and choose to recommit to the marriage rather than pursue divorce. We believe that a carefully crafted antenuptial or postnuptial contract, drawn up in a spirit of love and harmony, can play an important role in a strong and healthy marital relationship.

Seek the guidance of an expert family lawyer

If you’d like to know more about postnuptial contracts, or if you are preparing for marriage and would like to draft an antenuptial contract, contact Simon on 086 099 5146 or email sdippenaar@sdlaw.co.za to discuss your case in confidence.