What to do before you say ‘I do’

The importance of choosing the right matrimonial property regime

We’ve written a lot about marriage finances and the importance of antenuptial (and postnuptial) contracts. The decisions you make before the wedding will impact on your union until it ends – either by divorce or death. Will you be married in community of property or out of community of property? Put the romance to the side briefly and give serious thought to your matrimonial property regime, as this article from iol.co.za explains. 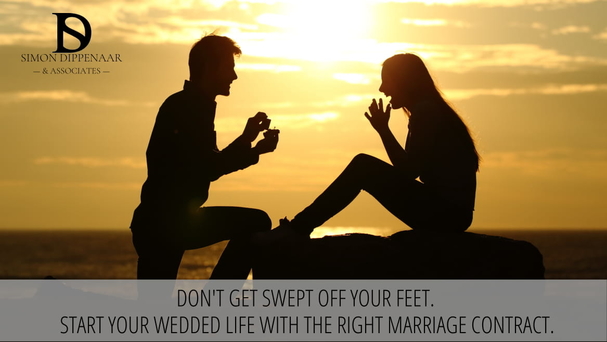 February is the month of love – what better time to discuss the serious side of romance?

Choosing how you get married has financial and legal implications. No, I’m not talking about whether you tie the knot on a wine farm or at the courthouse; I’m talking about the marriage contract that you and your beloved will enter into, which will govern how your money is shared should you ever get divorced.

Before we get to the nitty-gritty, it’s important to understand that there are three types of marriage in South Africa: civil marriage, civil union and customary marriage. The ceremony you choose – or don’t choose – doesn’t necessarily have a bearing on the ownership of assets once married.

What’s mine is ours, what’s yours is ours

This is marriage in community of property, and it’s the default legal position for any marriage in the absence of an antenuptial contract (ANC). Besides certain exclusions such as inheritance, you and your partner share everything 50:50 – all assets belonging to both spouses before marriage and all assets gained during the marriage. But it also means that both spouses share all liabilities accumulated before and during the marriage.

Marriage in community of property might be the cheapest option since you don’t have to hire a lawyer to draft an ANC, but it’s not always a good idea.

You might be flush with love – and cash – the day you get married, but if either flush fades and you get divorced, one spouse might profit handsomely from the marriage to the detriment of the other. Or worse: one spouse could be lumped with the other’s bad debt.

What’s mine is mine, what’s yours is yours

It might seem harsh, but getting married out of community of property can be a more sensible way to do it. It’s not nice to think of divorce when you haven’t yet kissed the bride, but with the help of a sensitive lawyer, drafting a fair and transparent ANC should be a relatively painless experience.

When you marry out of community of property, you can choose to do it with or without accrual.

Without accrual means that spouses keep separate estates – this applies to assets and liabilities from before the marriage as well as assets acquired and liabilities incurred during the marriage. Such a contract protects the individuals: if a husband is declared insolvent for example, his creditors can’t touch his wife’s estate. It’s a potentially devastating arrangement if one spouse is unable to grow his or her estate during the marriage. Take a stay-at-home parent, for example: in the event of a divorce, that parent will leave the marriage with nothing, despite having given up earning potential over the years to run the home and raise the children.

So, what’s the solution?

It depends on your personal view on the ownership of assets and each person’s financial situation.

There are cases where getting married in community of property works, such as when decision-making is based on religious grounds only and both parties are comfortable with the principle of joint ownership of assets regardless of all other circumstances.

Likewise, an out of community of property with no accrual contract can also make sense.

Take a situation where each spouse’s respective capital base is vastly different, for example. In this case, the spouse with lesser capital is usually awarded an annually increasing “salary” that is commensurate to the value of their contribution to the marriage.

In most cases, however, the solution that works for most people is to get married out of community of property with accrual. In this situation, the value of each spouse’s estate is declared and recorded at the time of the marriage, and the original estates remain separate for the duration of the marriage. But any growth that occurs during the marriage is shared by both spouses. The accrual system still protects a solvent spouse from an insolvent spouse, but it also gives some security to a spouse who puts his or her career on hold to raise children or otherwise look after the family.

The only potentially stressful part of this arrangement is how to calculate the accrual in the event of a divorce, but a trusted certified financial planner will have experience in this regard and will be able to advise accordingly.

At the end of the day, my advice is this: don’t get married with your eyes closed. Accept the reality that you could get divorced one day and speak to your partner about how to manage your assets in a way that works for both of you. It’s a safety net, nothing more. Now go and pop that bubbly.

Reprinted from iol.co.za. Written by Hardi Swart, director of Autus Private Clients and the 2019/20 Financial Planner of the Year.

A good divorce lawyer doesn’t only deal with divorce. SD Law & Associates are Cape Town divorce attorneys with vast experience in all aspects of matrimonial and family law. We can draft an antenuptial agreement for you if you are planning to get married out of community of property. If you are already married but want to change your marital regime via a postnup, we can also assist with that. Give Simon a call now on on 086 099 5146 or email sdippenaar@sdlaw.co.za.