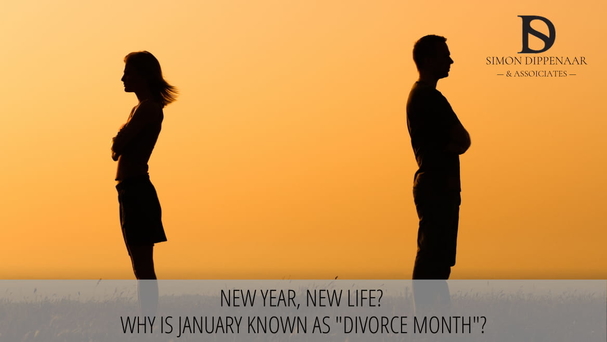 Why do more couples decide to end their marriage in January than in any other month? New year, fresh start? This article, reprinted from News 24, examines the phenomenon.

JANUARY is famously known worldwide, including here in South Africa, as the “divorce month”.

Most likely thanks to the festive season, many unhappy husbands and wives are reported to put aside their thoughts of divorce during the holidays and are more likely to entertain thoughts of a divorce, and actually file for divorce, in January.

According to Whyona Sithapersad and Jarid Jackpersadh of J Leslie Smith & Company Inc, a survey conducted among various legal practitioners shows that January is the most chaotic month for divorce.

They further stated that, in relation to this, it is safe to say that many divorce proceedings are instituted in January, even though they may only be finalised later in the year.

In a statement, the practitioners state that the rationale behind this is that couples are forced to live in close quarters with each other during the holidays without the distractions of work and other activities.

“This leads them to start looking critically at each other.

“A high proportion of couples will have a ‘happily ever after’ that lasts less than 10 years,” said the practitioners.

The results showed that 31,7% of black couples, 25,4% of coloured couples, 25% of white couples, and 22,4% of Indian/Asian couples who divorced had marriages that lasted between five and nine years.

“In practice, the most common reasons for divorce include but are not limited to: lack of communication, constant arguing, growing apart and spending less time together, lack of intimacy, infidelity, loss of mutual love and respect for each other , abuse [physical, emotional and financial] and finances,” explained the practitioners.

They further stated that the decision to institute divorce proceedings often originates from a succession of smaller decisions that people made during the course of their relationship that cause them to drift apart and an inability or lack of desire to work through their problems.

• Make the necessary decision and change to move out of an unhealthy relationship.

• Think of starting over again, consider the aftermath of the divorce, from managing finances alone, the children and so forth.

• Prepare your children because they are going to be the witness and recipient of this change of emotions.

• Come to terms with the reduced lifestyle since there will not be a joint salary anymore.

• Manage and organise your finances and map out your spending.

• Focus on the future by going after the things you have always desired while you were still married.

• Ask for financial support if you had a good support system in your marriage because things will change financially.

In concluding, Sithapersad and Jackpersadh of J Leslie Smith & Company Inc said: “A wise man once said: ‘Divorce isn’t such a tragedy. A tragedy is staying in an unhappy marriage, teaching your children the wrong things about love. Nobody ever died of divorce’.

Cape Town divorce lawyer SDLAW is an expert in divorce and family law. If you would like to discuss your divorce in confidence, contact Cape Town Divorce Attorneys on 086 099 5146 or email sdippenaar@sdlaw.co.za.