We’ve written before about the socialisation of boys and the role it plays in gender-based violence. In South Africa, over 60% of children are raised without their father present in the home, according to Africacheck.org. That means many boys are missing out on father-child play, which has been shown to be related to their ability to control their feelings as men. Interesting? We thought so. 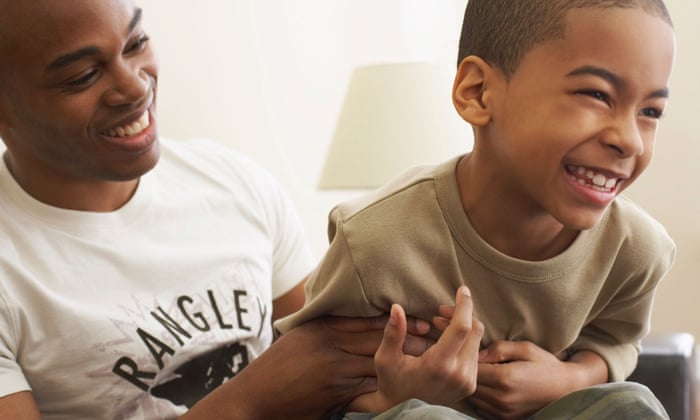 The research said children whose fathers tend to engage in more physical play like tickling and chasing have increased ability to learn to control emotions. Photograph: Radius Images/Alamy Stock Photo

Children whose fathers spend time playing with them at a very early age may find it easier to control their behaviour and emotions, which has a beneficial impact as they get older and start school, according to a new study.

Research carried out by Cambridge University’s faculty of education and the LEGO Foundation looked at how mothers and fathers play with children aged 0 to 3 years and how it affects child development.

While there are many similarities, it found that fathers tend to engage in more physical play like tickling, chasing, and piggy-back rides, which researchers claim appears to help children to learn to control their feelings.

The research is based on a review of data from 78 studies, carried out mainly in Europe or the US between 1977 and 2017, which found a consistent correlation between father-child play and a child’s ability later to control their feelings.

Researchers found that on average most fathers play with their child every day, but even with the youngest children play tends to be more physical, with fathers enjoying boisterous rough-and-tumble play with toddlers.

Those children who benefited from “high-quality” playtime with their fathers were, according to the study, less likely to display hyperactivity, emotional or behavioural difficulties. They also appeared to be able to control their aggression, and were less likely to lash out at other children during disagreements at school.

Paul Ramchandani, professor of play in education, development and learning at the University of Cambridge and one of the authors of the study, said: “Physical play creates fun, exciting situations in which children have to apply self-regulation. You might have to control your strength, learn when things have gone too far – or maybe your father steps on your toe by accident and you feel cross.”

“It’s a safe environment in which children can practise how to respond. If they react the wrong way, they might get told off, but it’s not the end of the world – and next time they might remember to behave differently.”

Children who only live with their mother need not be at a disadvantage, the authors point out. All parent-child play interactions in the early years are linked to more positive cognitive and socio-emotional outcomes for children.

“One of the things that our research points to time and again is the need to vary the types of play children have access to, and mothers can, of course, support physical play with young children as well,” Ramchandani said.

Fellow author Dr Ciara Laverty, from the LEGO Foundation, said the findings had policy implications, suggesting structures were needed that give fathers, as well as mothers, time and space to play with their children during the early years.

“Even today, it’s not unusual for fathers who take their child to a parent-toddler group, for example, to find that they are the only father there. A culture shift is beginning to happen, but it needs to happen more.”

Are you a father seeking contact with your child?

At Cape Town Divorce Attorneys, we strongly uphold the rights of men as parents, whether married or not. A good parenting plan can help both parents protect their contact rights, while putting the interests of the child(ren) first – the most important party in any relationship breakdown. We’ve helped many parents develop workable parenting plans with empathy and compassion. We are known for our high EQ and respectful approach to the divorce context. Contact Simon on 086 099 5146 or email sdippenaar@sdlaw.co.za to discuss your case in confidence.