Divorce finances: It takes five years to recover financially after a divorce

This article from iol.co.za about divorce finances illustrates the importance of considering your marital regime carefully and protecting your assets with an antenuptial (or postnuptial) contract.

Emotions — and expenses — often run high during a divorce, but people and their bank accounts can bounce back given enough time. A new study from Fidelity Investments shows that by five years after a divorce, most people feel recovered from the psychological and financial blows. 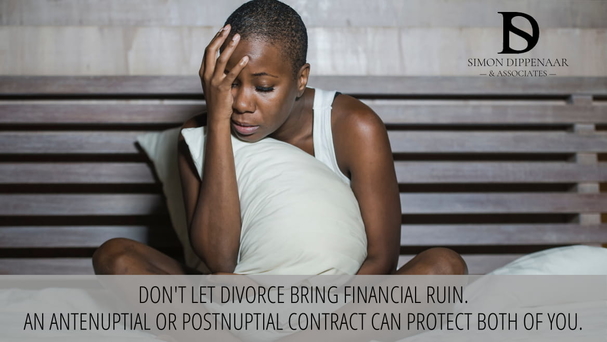 You can speed your recovery by taking smart preventative measures, learning from the cautionary tales of those who have gone before.

Among the biggest regrets the Fidelity study exposed, for example, is that 80% of those who were not involved in their daily finances during their marriages felt bad about it once they get divorced. Those people also took longer to recover from the financial stress of divorce, with nearly 40% of them saying they have yet to recover.

So what can you do now to protect your future self – which works not just for divorce but also if you end up widowed, or simply want a more financially equal marriage?

1. Pay attention and get involved

“Knowledge is power, and you should have it from the beginning,” said Emily Pollock, a partner at Kasowitz Benson Torres, specialising in matrimonial and family law.

Both spouses need to know basic things about family finances, no matter who handles bills or long-term investing. That means looking over tax returns, knowing about the bank accounts, keeping tabs on everyone’s retirement balance and making joint decisions about big financial moves like buying a house.

Fidelity has a document checklist to help you know what to look for, piece by piece, Stoddard said.

Talking about money is hard for a lot of people, but if you do not do it, you can get in some bad jams. Fidelity’s study found that 14% of respondents reported the divorce uncovered debt they did not know about, and 10% found hidden assets. This was particularly prevalent among women who had been married for more than 21 years.

“Make sure you have transparency,” Stoddard said. “Chip away at it. Use the resources available. Build a strong support network. It is less overwhelming.”

A prenuptial agreement (Antenuptial Contract) where you spell out all that you have and set up a plan for the future split of everything, should there be one, is the most protection you can get for yourself, said Carole Bass, a trusts and estates partner at Moses & Singer.

But even then, people do not pay as much attention to what it says as they should, and there are a lot of unknowns, Bass added.

Sometimes people inherit money during the course of the marriage, or sell a business, and do not pay proper attention to the way the assets are co-mingled with shared money.

Antenuptial contracts, made after a marriage takes place, can solve some of these issues as they arise. Some people employ trusts as well, to keep assets separate. But more issues may crop up as you go.

“Nobody wants to think about marriage like it is a business relationship, but it is,” Bass said. “You should start this out as far as possible, and then it’s easier to have a clear head.”

A good divorce lawyer doesn’t only deal with divorce. SD Law & Associates are divorce lawyers with vast experience in all aspects of matrimonial and family law, as well as divorce finances. We can draft an antenuptial agreement for you if you are planning to get married. If you are already married but want to change your marital regime via a postnup, we can also assist with that. Give Simon a call now on on 086 099 5146 or email sdippenaar@sdlaw.co.za.

Three surprising ways divorce can affect your will