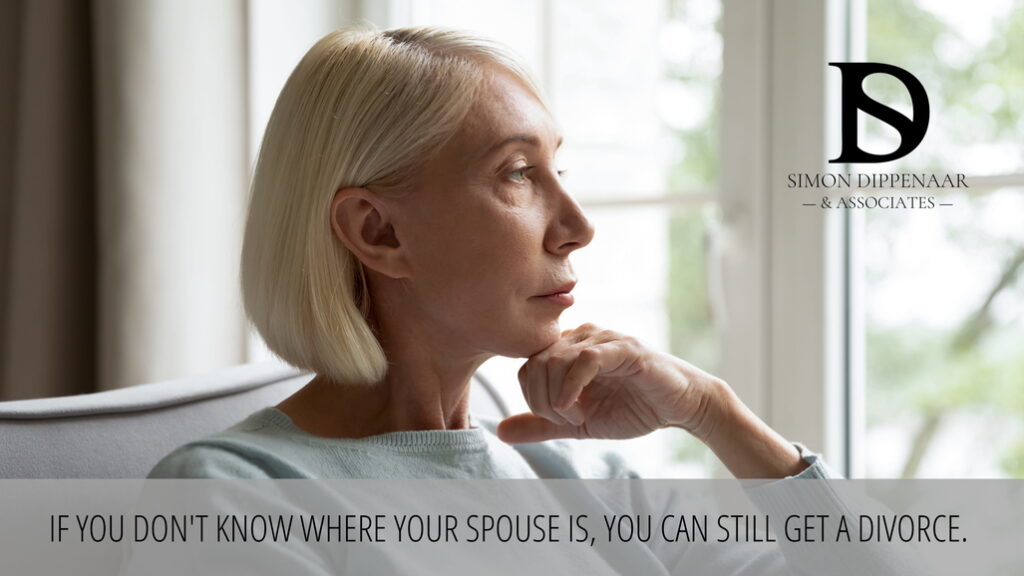 Although international travel has been somewhat curtailed recently due to the COVID-19 pandemic, we live in a world where it is common for people to travel and form relationships with citizens of other countries. When these relationships are solemnised in marriage, and then later break down, one spouse may decide to return home, and may not tell their spouse of their whereabouts. This can also happen with a couple who share the same domicile. Sometimes a spouse just disappears. So how do you divorce an absent spouse? Are you condemned to remain married until you can locate them? No, you are not. In this article we cover how you can initiate a divorce action when your spouse’s whereabouts are unknown.

A marriage may be dissolved by a court on the grounds of an irretrievable breakdown of the marriage, mental illness, or unconsciousness, as provided for in section 3 of the Divorce Act, 70 of 1979. The grounds for divorce are further influenced by the circumstances of the case. When a spouse’s whereabouts are unknown and there is no communication between the partners, initiating the divorce action is trickier, but not impossible.

A court has jurisdiction in a divorce matter when one or both spouses are domiciled in the area on the date the action is initiated, or if one or both spouses have been ordinarily resident within the jurisdiction of the court on that date for at least a year previously. The Act further provides that the patrimonial consequences of a marriage are governed by the laws of the country where the husband was domiciled (ordinarily resident) at the time of the marriage. This means that if the husband is domiciled in a country where the presumption is that all marriages are concluded out of community of property, unless otherwise agreed, then the South African presumption of marriage in community of property (unless there is an antenuptial contract in place) will not apply. Even if a husband changes his domicile after the marriage, the patrimonial consequences of marriage will continue to be governed by the law that applied to the marriage when it took place.

To initiate divorce proceedings, a summons must be served personally on the defendant by a sheriff of the court. If the defendant cannot be found after a diligent search, then an alternative form of service can be authorised by court order. Alternative methods of service include service by way of substituted service and edictal citation. Substituted service may be sought where the defendant’s exact whereabouts are unknown but they are believed to be within the Republic of South Africa. Edictal citation is required where the defendant is or is believed to be out of the country.

Where the summons cannot be served personally, substituted service is permitted in the Magistrate’s Court, if the defendant is believed to be in South Africa. The Uniform Rules of the High Court do not provide for service by way of substituted service. The plaintiff must show in an affidavit that every possible attempt has been made to find the defendant. They must request authorisation of an alternative method of service to bring the summons to the attention of the defendant. The application should concisely set out:

The applicant must apply to court to authorise the alternate method of service within South Africa (although the defendant’s whereabouts are unknown and therefore they could be overseas) and to set out the terms of the order of divorce sought. The grounds for divorce as well as the reason for requesting substituted service must be set out. The plaintiff must affirm that they still reside within the jurisdiction of the court and/or state the facts that support their reasonable belief that the defendant is still within the Republic of South Africa. Supporting evidence may include the fact that the defendant is believed to reside, is employed, or holds immovable property within the area of the jurisdiction of the relevant court.

How to serve the summons by substituted service

The plaintiff may seek an order authorising service of the summons to be served by publication in a newspaper that circulates nationally and/or in the area where the defendant is believed to reside, be employed or hold immovable property. The publication must follow the format determined by the prescribed form in the Magistrate’s Court Rules. This form must set out the relief sought in terms of the divorce action and invite the defendant to enter a notice of intention to defend within one calendar month after publication. Failing this, the plaintiff’s attorneys will place the matter on the unopposed motion roll by filing a Notice of Set Down. Substituted notice can also be served on a missing spouse via email or social media sites such as Facebook and LinkedIn, as newspapers are becoming less and less relevant with the widespread use of electronic platforms for news consumption and social contact.

SD Law & Associates are experts in divorce law and can help if you want to divorce an absent spouse. As Cape Town divorce attorneys, we’ll protect your legal interests, while helping you through this difficult time with sensitivity and empathy. If you’re considering divorce and need advice call Simon on 086 099 5146 or email sdippenaar@sdlaw.co.za.