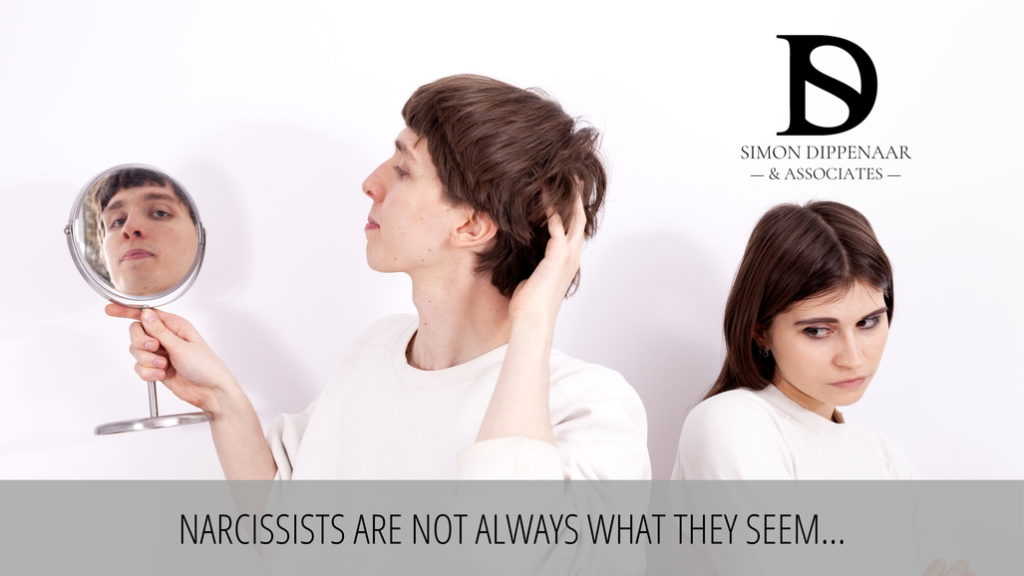 Narcissists can be grandiose or “vulnerable” – but they’re still narcissists

We’ve written a lot about narcissism and narcissistic personality disorder (NPD) over the past few years, because we see a lot of it in our family law practice. It is a common factor in divorce, and narcissistic parents can be a challenge when it comes to agreeing a parenting plan. But the general understanding of narcissism is that narcissists are overly confident, charming, engaging individuals. We don’t tend to think of introverts as narcissists. However, recent research shows that there are two types of narcissist – overt and covert, or, to give them their more technical terms – grandiose and vulnerable.

Characteristics of a narcissist

We all have a bit of the narcissist in us. We are all capable of behaving in a narcissistic way at times. Having a sense of self-interest is human, and arguably sometimes essential for survival. But when a person displays these traits on a regular basis, we start to consider a diagnosis of narcissistic personality disorder (NPD). The traits that typify NPD are, in addition to self-interest, a sense of entitlement and vanity. The American bible of psychiatric illnesses, the Diagnostic and Statistical Manual of Mental Disorders (DSM-5), describes symptoms that include “a constant need for admiration, an unrealistic sense of self-importance, a lack of empathy, and difficulty in forming meaningful relationships”.

It’s hard to think of a narcissist as shy or modest; this seems the antithesis of narcissism. However, covert narcissists appear to lack self-confidence. They may seem shy or withdrawn, and may even deprecate themselves. But they still think they are superior; they just express it differently. They may avoid work or situations that they think are beneath them. They may be defensive and extremely sensitive to criticism. This often results in passive-aggressive or manipulative behaviour. Relationships, including work situations, may be difficult to maintain. And depression and anxiety are common symptoms of vulnerable narcissism.

Covert narcissists, rather than bragging and flaunting their self-importance, often put themselves down. Ultimately they are fishing for compliments, looking for others to bolster their sagging self-esteem. They excel at playing the victim. In fact, victimhood could be called the hallmark of covert narcissism. They may avoid socialising, partly out of a fear of having their failures exposed, and partly because they feel superior to and distrustful of others.

Ironically, though they don’t display grandiose behaviour, covert narcissists often indulge in grandiose fantasies. These may include thoughts of being admired or praised or recognised at work. They tend to hold grudges, often because they believe they have been unfairly treated or someone else has received the praise due to them. This can even lead to a desire for revenge. Covert narcissists tend to be eaten up with envy and feel inadequate.

We tend to think of narcissists as being incapable of empathy. Ironically, the covert narcissist may display considerable empathy and seem very willing to help. But this behaviour tends to be motivated by a desire for approval and praise. If they are not appreciated for their act of kindness, they become resentful.

NPD is a poorly understood topic, with psychologists still learning about its causes. One study linked adults with narcissistic personality traits to parents who overvalued their achievements and heaped praise on them. This could lead a child to feel superior to others. It’s interesting to consider how the recent trend of praising children for effort rather than results may affect future generations of adults. By contrast, affectionate parents who value children for who they are rather than what they achieve tend to have children with a healthier sense of self-esteem.

But attributing everything to parenting styles is an oversimplification. Siblings who have been parented in exactly the same way often turn out to be radically different. The American Psychological Association says that personality disorders in general are associated with genetics, childhood trauma, and verbal or sexual abuse. Adults with narcissistic tendencies or traits often have a parent with NPD, or they may have been abused as children…or both. Psychologists don’t fully understand why one person exposed to causal factors develops NPD and another doesn’t, or why some people develop overt NPD and others develop covert NPD.

How to deal with someone with covert NPD

It’s easy to advise ending the relationship or otherwise putting distance between yourself and the narcissist. But that is not always easy to do, nor may you want to. You may care about the person; and ultimately NPD is a personality disorder signifying that the individual needs help. The key is to protect yourself while facilitating treatment. With covert narcissists in particular you may feel the need to take care of them. After all, that’s what the victim mentality is seeking – a rescuer. You may feel sorry for them, or they may appear needy. How can you abandon this person when they need you most?

Dr Sarah Davies, psychologist and author of Never Again – Moving on from Narcissistic Abuse and Other Toxic Relationships, writing in the Guardian, suggests understanding the roles of persecutor, victim and rescuer in the drama. If you can recognise when you are being sucked into the rescuer role, you are more likely to be able to avoid it. Covert narcissists tend to be attracted to empaths and enablers. Someone with self-esteem issues of their own may be buoyed up by the covert narcissist’s need for their approval and praise. The relationship can become co-dependent. Davies says the best thing you can do is trust your instincts, inform yourself, and avoid being caught in the narcissist’s dynamic. Easier said than done! But now you know.

SD Law & Associates are experts in divorce and family law and have dealt with many cases of narcissistic control in intimate relationships. If you are married to someone with NPD and considering divorce, or just want to discuss your options, we can guide you through the process with compassion and dignity. Contact attorney Simon Dippenaar on 086 099 5146 or email simon@sdlaw.co.za.

This entry was posted in Divorce.