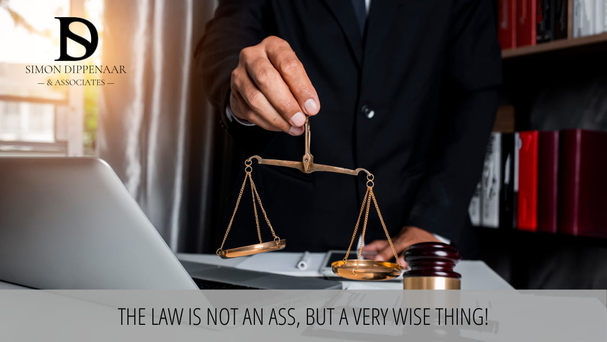 It was Charles Dickens who, through his character Mr. Bumble in Oliver Twist, said, “The law is an ass.” It’s true that sometimes the legal system can appear obstinate when laws are applied rigidly. But the law is also a stalwart tool that protects our rights. One of the hallmarks of a democracy is the ability of ordinary citizens to challenge laws that seem to them to be unfair or unjust. And our exemplary Constitution and Bill of Rights give us a concrete framework within which to evaluate the fairness of existing laws, many of which predate the modern Constitution. Recently an “ordinary citizen” brought a case before the High Court of the Western Cape, challenging the constitutional validity of Rule 43. The essence of the applicant’s case was that Rule 43 contains no guidelines or timelines and is indefinite and non-appealable.

Rule 43 of the Uniform Rules of Court is an administrative procedure that allows an order for interim maintenance to be made by the court during divorce proceedings. It is intended to provide support during divorce proceedings – usually to a wife and children, who historically have been financially disadvantaged by divorce – until the action is finalised, when the order lapses and any maintenance order resulting from the divorce decree takes effect. Interim maintenance is intended to protect the interests of children and may also include custody arrangements as well as financial support. A Rule 43 order is non-appealable because the length of the appeal process could compromise the very intention of the law, which is to prevent financial hardship during the process of divorce.

What did the courts say?

The application was unsuccessful, and the case was thrown out, but the judgement makes for riveting reading. The applicant referenced the Bill of Rights, suggesting that Rule 43 convenes fundamental rights. He cited: equality before the law; dignity; the right not to be treated or punished in a cruel, inhuman or degrading way; privacy in the form of the right not to have one’s possessions seized; access to information; the right to lawful, reasonable and procedurally fair administrative action; and the right to have any dispute that can be resolved by the application of law decided in a fair public hearing before a court. He further stated that, although Rule 43 appears to be neutral and non-discriminatory, it could have discriminatory effects, such as arbitrary deprivation of a spouse’s assets.

The judgement is fascinating because it distinguishes between substantive law and administrative procedure. Long before Rule 43 existed, our common law granted the right to orders for maintenance, care and contact of children, and a contribution towards legal costs “pendente lite” – the legal term for “during litigation”. If Rule 43 didn’t exist or were abolished, the power of an applicant to apply for and of the law to grant an order would remain. Another administrative procedure would be introduced to implement the power of the law.

Therefore, in passing this judgement, the judge ruled that the detriment cited by the applicant, which could arise due to the indefinite nature of the rule, has no bearing on the constitutional validity of Rule 43, because the rule is not concerned with the substantive law. There could only be a challenge to the constitutional validity if the detriment arose as a result of the specific procedure laid down in Rule 43.

Despite this distinction being clear and inarguable, the judge went on to demonstrate why, in fact, the law behind Rule 43 is also not unconstitutional or unjust. He addressed each of the fundamental rights the applicant claimed were breached:

No guidelines, timelines, is indefinite and non-appealable?

The judge then proceeded to address the applicant’s charge that Rule 43 is unconstitutional because it contains no guidelines or timelines and is indefinite and non-appealable. The concern was that an interim order could last a very long time in a protracted divorce settlement, resulting in hardship or injustice to the burdened spouse. He reiterated that the substantive power to make interim orders such as Rule 43 is a power rooted in common law. While appreciating that abuse of this power could cause hardship, this could apply to any interim matrimonial order obtained by any procedure. Furthermore, although Rule 43 orders are not appealable, for the reason stated above, it is possible to approach the court for an amendment to the order, for example if circumstances have changed (e.g. the beneficiary of the order has a new partner providing support or secures employment). Such a case, or a scenario in which the main case has been delayed significantly longer than expected when the interim order was granted, would be legitimate cause to request a re-assessment of the order. So all of the applicant’s objections to Rule 43 can in fact be overcome using due process of law.

The judge determined that, “The applicant’s application for an order declaring Rule 43 to be unconstitutional and invalid is dismissed.”

SD Law is a firm of experienced divorce attorneys based in Cape Town, with offices in Johannesburg and Durban. What does a family lawyer do? Family lawyers deal with much more than just divorce and custody. If you need interim maintenance, or if you feel your Rule 43 order is no longer appropriate and you would like to apply for an amendment, call family lawyer Simon on 086 099 5146 or email sdippenaar@sdlaw.co.za. We will help you secure the best possible outcome for all parties.

Interim maintenance – how to use Rule 43 in divorce proceedings