Along with the rest of the country, we at SD Law were outraged and heartbroken by the spate of violent attacks on women that marked this past winter. Although assaults by strangers do happen, in the vast majority of cases, the victim knows the assailant. A study conducted last year at Glasgow University in the UK found that only 9% of attackers were strangers to the woman assaulted. 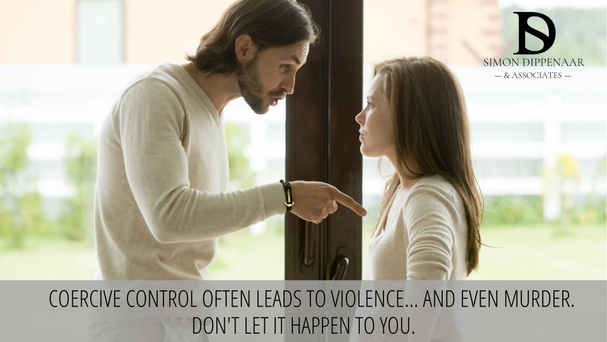 Furthermore, physical violence is often presaged by emotional violence and controlling behaviour. It often begins with small actions that in themselves go unnoticed. A boyfriend’s jealousy or possessiveness can at first seem endearing, a sign of affection. By the time the mistrust has progressed to control, the woman may be so deeply involved in the relationship that she finds it very hard to extract herself. We make no apologies for our lack of gender neutrality. While we acknowledge that isolated incidents involving female violence against men do exist, the vast majority of gender-based assaults are perpetrated by men against women. One gender activist has suggested that we stop talking about “Violence against Women” and call it what it is: “Violence against Women by Men”.

What is coercive control?

To learn more about this phenomenon, we’ve studied the work of Lisa Aronson Fontes, a psychologist at the University of Massachusetts and the author of Invisible Chains: Overcoming Coercive Control in Your Intimate Relationship. According to Aronson Fontes, much behaviour that goes on in relationships would not be considered abusive by a criminal or even a family court. Her context is American; in South African society, with its traditional views of patrimony and the subservient role of women, this is even more true. Initially the controller may seem like a saviour, especially if a woman has children and/or limited resources (think of “sugar daddies”). Over time, “…the controlling behaviours suppress conflict. One member of the couple…is deprived of the resources she needs – such as money, friends and transportation…” The controller seeks to isolate his partner socially, and often financially, making her dependent on him. He may stalk her, watching her movements via technology, and micromanaging her daily life. Even a strong woman can be worn down by the constant threat of entrapment and the fear of displeasing her partner.

Eventually the controlled woman starts to doubt herself. Controlling partners can be persuasive, charming and outwardly very genial, which is why friends and family often don’t believe the woman’s claims of emotional abuse. This is the abuser’s hidden power, according to Aronson Fontes. The combination of her partner’s manipulation and her friends’ disbelief leads to self-doubt and disorientation. The woman may lose her own grip on reality, often encouraged by her partner’s “gaslighting” behaviour. The man often belittles the woman, and degrades her. While this can be verbal, it is often sexual – involving coercion and humiliation.

Next stop on the coercive control train – assault

When a man views a woman as property and treats her with disrespect and disdain, it is only a matter of time before physical violence enters the scene. This is also part of the control – physical abuse creates a climate of fear and stops the woman from seeking help or running away. If she does, it is extremely common for the man to come after her, and unless there is a protection order in place to stop him contacting her, retribution can be harsh. Women often blame themselves for domestic abuse; they must have “misbehaved” or done something to deserve the punishment. A recently published study of 358 domestic homicide reviews by Dr Jane Monckton-Smith, of Gloucestershire University in the UK, found that control was present in 92% of domestic killings. This is an alarming statistic. Coercive control does not just do psychological damage. It can be fatal.

Don’t lose your life for the love of your life. There are signs you can look out for. If anything about your relationship makes you uncomfortable, ask yourself if the behaviour is reasonable. It may be that you’re just not suited to each other, in which case you can part amicably. However, if your partner does any of the following, you may be in the throes of a controlling relationship.

There are others, but if you are experiencing coercive control it’s almost certain that a number of these will be familiar. Although leaving may feel impossible, help is at hand. There are organisations that provide support to women who have suffered violence and abuse. That support ranges from a safe place to stay to legal assistance. The Reeva Rebecca Steenkamp Foundation is one such organisation and there are many others.

SD Law is a firm of family attorneys with deep experience of helping women escape abusive relationships and find peace and dignity in a new life. We can serve a protection order on a controlling partner and help you initiate divorce proceedings, if appropriate. We will connect you to relevant support services and make sure you and your children are safe. At Cape Town Divorce Attorneys, we understand how deeply distressing coercive control can be, and we will handle your case with discretion, empathy and compassion. Contact Simon on 086 099 5146 or email sdippenaar@sdlaw.co.za for a confidential discussion. We can call you back on a safe number.