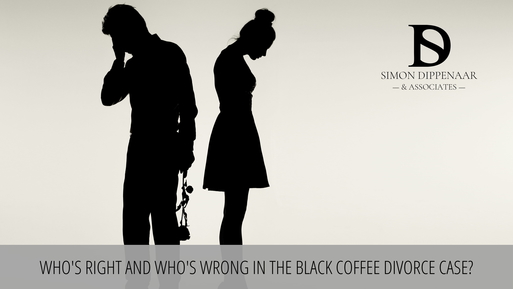 Who is right and who is wrong in this high-profile divorce?

We often envy celebrities their money and their glamour, but popularity comes at a cost. Going through divorce is tough enough. Most of us are able to navigate this extremely difficult life event in private, calling on our closest friends and family for support. For public figures, living life in the spotlight is part of the deal. One of the pitfalls of fame is public scrutiny of matters most of us would rather handle behind closed doors. Celebrity also means that small incidents may be exaggerated by the media, leaving the rest of us unsure where the truth lies. DJ Black Coffee, whose ongoing divorce has been the subject of these pages in the past, is in the news again.

News24/the Drum reports that Black Coffee, whose real name is Nkosinathi Maphumulu, and his wife Enhle Mbali Mlotshwa recently appeared in Randburg Magistrate’s Court, where she sought a protection order against him. She says he has used violence against her. He says the order is actually to keep him from seeing his children. Who is right? We don’t know. That’s the job of the magistrate to decide. But the case flags some important issues we see over and over again in our Cape Town law firm.

Gender-based violence is never excusable – ever

Mbali claims Maphumulu slapped her on the wrist during a disagreement last month. He said on Twitter, “In the name of respect and dignity for my family and my children, I’ve been quiet. But now I feel a need to speak. GBV is a major issue in our country. Every day we read about horrendous crimes committed by men against women and children.”

“I personally grew up witnessing GBV in my own household and from a young age, I vowed never to allow that to happen again under any circumstances. I did not assault Mbali, the mother of my children. I didn’t do it now and I have never done it before.”

We hope he is telling the truth. Couples often use “play-fighting” gestures with each other, and sometimes a slap on the wrist is just a slap on the wrist. Then again, that usually happens affectionately. When the couple is estranged, the likelihood of playful physical contact is slim. We must always take an allegation like this seriously. Violence against women is out of control in this country, and we all have a duty to believe women when they tell us what they have experienced.

Mbali said, “No matter how small it is, it always escalates, we have seen our Karabos, our Reeva Steenkamps, and I want that to stop today. I will fight with a lot of women fighters who I have rallied around me, and I will not stop until justice is done.”

Maphumulu says he is being kept apart from his children, and the protection order is a manipulation of the law to keep him out of the marital home. His Twitter feed continued, “It is truly regrettable that she has chosen to mislead the public using the name of GBV and seeking a protection order against me to separate me from my children and our home.

“Divorce is never easy but for us, it has been especially painful, and I’ve spent the last three years in and out of intense therapy to deal with it privately. Every day I am attacked by relentless lies and falsehoods. I did not assault her.

“As a law-abiding citizen, I will absolutely observe the demands of the interim order but will categorically oppose the permanent installation of its prescripts and this is why we are currently in court.”

If this is true, it is regrettable. Children need both parents in their lives, if not in the same house. There is evidence to show that interaction with fathers plays an important role in children’s emotional development. A recent study, published in the Guardian, showed: “Those children who benefited from “high-quality” playtime with their fathers were…less likely to display hyperactivity, emotional or behavioural difficulties. They also appeared to be able to control their aggression, and were less likely to lash out at other children during disagreements at school.”

Fathers, whether married or not, have rights. And of course they have responsibilities and obligations. Equally, the Children’s Act, strengthened by the Children’s Amendment Bill currently before Parliament, puts children’s interests before those of either parent. If there is a risk of violent behaviour from either parent, children are entitled to protection.

We want to believe that Black Coffee was not violent towards his wife. But we also hope that Mbali is not using a tool the law provides to protect women (or anyone else under threat of violence) – the protection order – in the wrong way. Let’s hope the matter is resolved by the courts and this unhappy couple can get on with their lives away from the limelight.

Get professional help from a leading attorney in Cape Town

SD Law is law firm in Cape Town with expertise in family law. If you need help with any of the issues raised in this article, or if you have any questions about the Children’s Act and Amendment Bill, call Simon on 086 099 5146 or email sdippenaar@sdlaw.co.za.